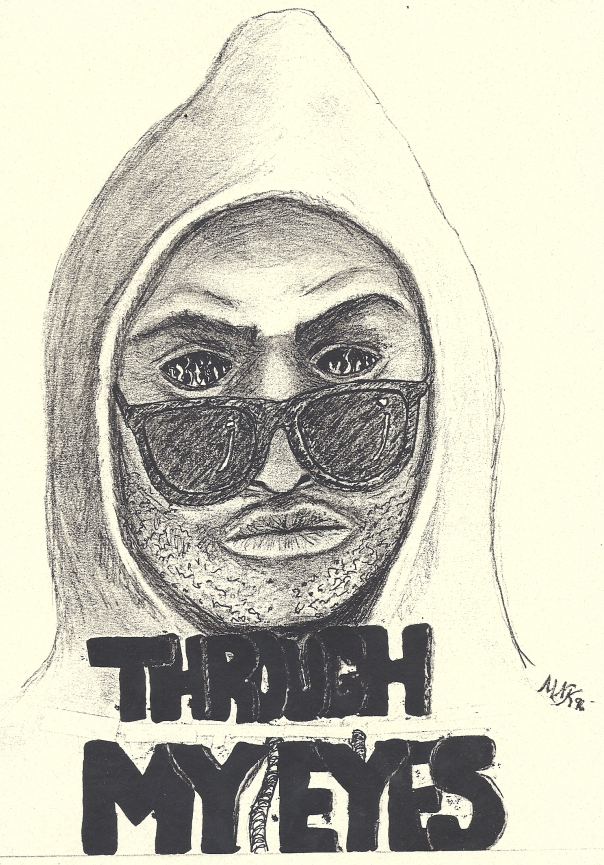 Cover to my First Book of Poetry – Designed in 1994

Not red
from smoking marijuana
or drinking

Not red
from staying up late
or not getting enough sleep

If you look in my eyes
you can see hurt and pain
you can see strong determination, will, and desire
you can see the explosion of a rebellious mind
If you stand too close
you can feel the heat of the fire

I was happy.  A young boy taking daily walks with my grandmother.  Excited about starting school because I had been told I would learn to read or write there.  I was 4, and my days were spent playing with the kids in my neighborhood.

I was 5 when my sister caught me on the porch kissing the girl from across the street.  Me, my best friend, and the girl across the street used to love playing Dukes of Hazard.  I can’t remember if I was Bo or Luke, but she was Daisy.  We would tongue kiss, we would hump, and I would try to put my pee-pee in her.  When I got caught, I remember the intensity of the conversation.  I remember the whipping I got, it was the worst whipping I had ever had.  The whipping was my first message that race mattered.  Her dad was racist, we lived in Bakersfield, my parents and neighbors were concerned about what would happen if we were caught messing with that little white girl.  They remember Emmitt Till, and they didn’t want me to be him.

I was in 2nd grade when I saw the graffiti at my elementary school.  It read, “The South Will Rise Again”, “Long Live the KKK”.  That same year, I caught my first glimpse of people covered in white sheets and hoods.  I didn’t know who they were, but the kids were talking.  Later that day I would ask my mother what is the KKK?  She told me to look it up.  I opened an encyclopedia and saw images of people covered in sheets, bodies hanging from trees, crosses burning in people’s front yards.  I didn’t understand it all, but I was terrified.

I was in the 7th grade the first time I was called a Nigger.  It was that same year that I started to become painfully aware of the racial disparities.  I still didn’t understand it, but I could sense there was something different.  That was the year I became aware of the whites against the blacks fights.  Even still, Race wasn’t a major theme in my life at that time, because my Junior High was attached to a continuation school, sat across from a park where the Bloods hung out, my friends were starting to become young Crips, and there were fights, violence, and Narcs at my school.  I had bigger things to worry about than Race and I still had friends of all ethnicities; including white people… but looking back, that’s about the age where the lines started to become more pronounced, where the separations started to become more obvious, where the people began to form cliques based on neighborhoods, race, and class.

I was in 9th grade the first time racism hit me in the face.  I was at a school where the mascot was a Rebel, where there were confederate flags hanging in the yards of the people who lived across the street from the school, where confederate flags were proudly displayed on license plates, and the racist tones started to become more pronounced.  The blacks against the whites fights continued, the gang banging became more serious, and I became aware of areas of Bakersfield that were off limits to us.  But what I remember most is the teacher who told me I wouldn’t amount to anything and told my friends they should stay away from me because I was bad influence on them.  I was hurt, I hated her, and that was the first time I ever failed a class.  Not because she failed me, but because I refused to accommodate a racist teacher by doing the work.

The day I turned 16 I got my license and shortly after my first bucket.  Finally, we were growing up, getting our first taste of freedom, gas was cheap, and for the first time we had the means to learn more about the world we lived in.  I was becoming a black man; a gifted student, great friendships, confident and determined, and for the first in my life I began to be treated like a threat.  It was when I turned 16 that I began to get profiled by the cops.  Started getting stopped randomly, being questioned about my whereabouts, followed through the streets of my city for no reason, pushed and ticketed for non-offenses, and even had police that would stop and simply stare at me while I would wash my car in my front yard.  This was the age I first started to become angrily aware of my city and the America I lived in.  I was infuriated, but I refused to live in fear.  This was also the year my mother decided to begin pushing me away from Bakersfield.  She feared that I would be murdered in the city I call home like so many of the young black men that had come before me; simply because I didn’t know my place.

I had just turned 18 when I left for college.  Free from the grips of racism.  No longer exposed to the drug selling, the gang banging, the racist cops, the overt racism, and the city that would try to destroy me.  But I had already been wounded deeply.  I had already experienced racism and I had already studied my history.  I was familiar with the slave trade, the torture, the black codes, the Jim Crow, the Reconstruction, the KKK, the lynchings, the boys who were murdered by cops for being black.  I was still angry, a walking time bomb ready to blow up at the first hint of trouble.  It was reflected in my writing, in my friendships, in my attitude, and in my speech.  America had become black and white in my mind.

So when the cop followed me all the way through my college campus before stopping me and accusing me of running a stop sign, I was barely able to contain my anger… and when 5 officers pulled their guns on me as I was attempting to return a video, ran my license, and then let me go after telling me they stopped me because I had a tail light that was out; my anger was almost uncontrollable… and when I was given a citation at the airport while picking up a friend because I had a fraternity license plate on my car instead of a California plate, I couldn’t take it any more; especially after realizing this cop walked right past another car who was also missing a front license plate to get to me…  and when I was asked to speak to the students and the media at a Convocation at my college campus because of a bomb threat issued to the Ethnic Studies department; I understood clearly who I was.

Fortunately, I had writing as an outlet to my emotions.  Writing as a way to keep my mind in check just enough to keep fighting the battle intelligently.  I was becoming smarter and more understanding of my environment.  The anger was starting to be replaced with cold contemplation and the work of change.  I was growing, and even though the racism wasn’t going anywhere, I was finally learning how to not let it control me.  Through this growth, I was starting to learn to embrace people again, not based on race, but based on God, based on humanity.  I was beginning to find happiness even in the mist of inequality.  For the first time in my life, I was learning to fight with love, and for something instead of against something.

But I must tell you, even after nearly 40 years on this earth,  my anger is not completely gone and I’m not completely healed.  I am still triggered by racist cops and the accepted indiscriminate acts of violence against our youth.  I am still angered by the knowledge that my sons, my pride and joys, will be forced to fight the same battle with racism that I spent most of my life fighting.   Even as I try to define my life solely on the foundation of love, my heart hurts because I know my sons may one day be the new Emmett Till, the new Amadou Diallo, the new Tyisha Miller, the new Oscar Grant, or the new Trayvon Martin.  I know that one day my wife and I may be forced to bury our sons because of some senseless nonsense in the land of the free.  My soul is in pain, because I am aware that the life of my sons, beautiful and innocent as they are, does not hold the same value as the life of the scum of the earth in America…

So today, as I have for most of my life, I fight for our soul, our freedom, and our youth.  I am not raising kids, I am raising warriors, in the same way our ancestors raised us.  I am not begging for your help or your justice, I am building the future in spite of your wickedness.  I will not have my sons praise your flag, my sons will only praise God… because only the love of God can deliver us from the Belly of this Beast.

Posted in My Thoughts, Poetry