Sean King is a husband, a father, a writer, a published author, a spoken word artist, a computer geek, a community activist, a dreamer, and someone who loves life. He has performed on stages and in different venues across the country. He has three books of poetry (Through My Eyes I, Through My Eyes II, and Hypnogysms). He is mentor to numerous youth in the Northern California area. He is an extraordinary poet with a gift of word manipulation, splicing, wielding and other things outlawed by the U.N.

Anna Marie Sprowl has been writing and performing poetry for years. Her work ranges from the political to the domestic – her pieces provide both warmth and fire for the reader. Anna Marie’s poetry flows with a smooth style and grace; she fills both pages and stages with her life experiences. Never shy to self-expression, she seeks to see understanding in the eyes of her audience. Anna Marie has performed at The Show and Underground Books, as well as the Crocker Art Museum, The Guild Theater, and Jazz and Poetry 2010 and 2012 with the Brubeck Institute Jazz Quintet. She is the winner of the 2012 Super Love Jones Poetry Slam.

Laura Cook (immoBme) is the eldest daughter to Cynthia Robinson of “Sly and the Family Stone,” born in Sacramento, raised in Oak Park and possesses a few forgotten origins of MmaMmaAfrica. Her poetic tag “immoBme as.I.B.we” canopies much in journey, as she’s further sharin’ shaklez in homage to the goodness of God. She is one of Sacramento’s darlings. 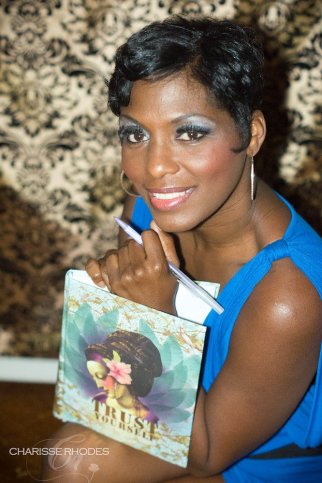 Kelly Freeman is a Los Angeles native who began writing poetry at the age of 12. Her father was a poet and encouraged her to write and bought her first journal. She started performing on stage here in Sacramento ten years ago. She has also performed in Los Angeles, and the bay area. Kelly has been a featured artist at the Luna’s, The Guild Theater, Mahogany poetry series, Brown Sugar series, and the touring erotica show “The sweet spot”. She was recently featured at the Shine cafe and Pepperbellys and looks forward to performing more in the future. She is currently writing a book, but has put printing on hold so that she can add some of the works of her father whom she recently lost. It has always been her dream to share his poetry with the world.